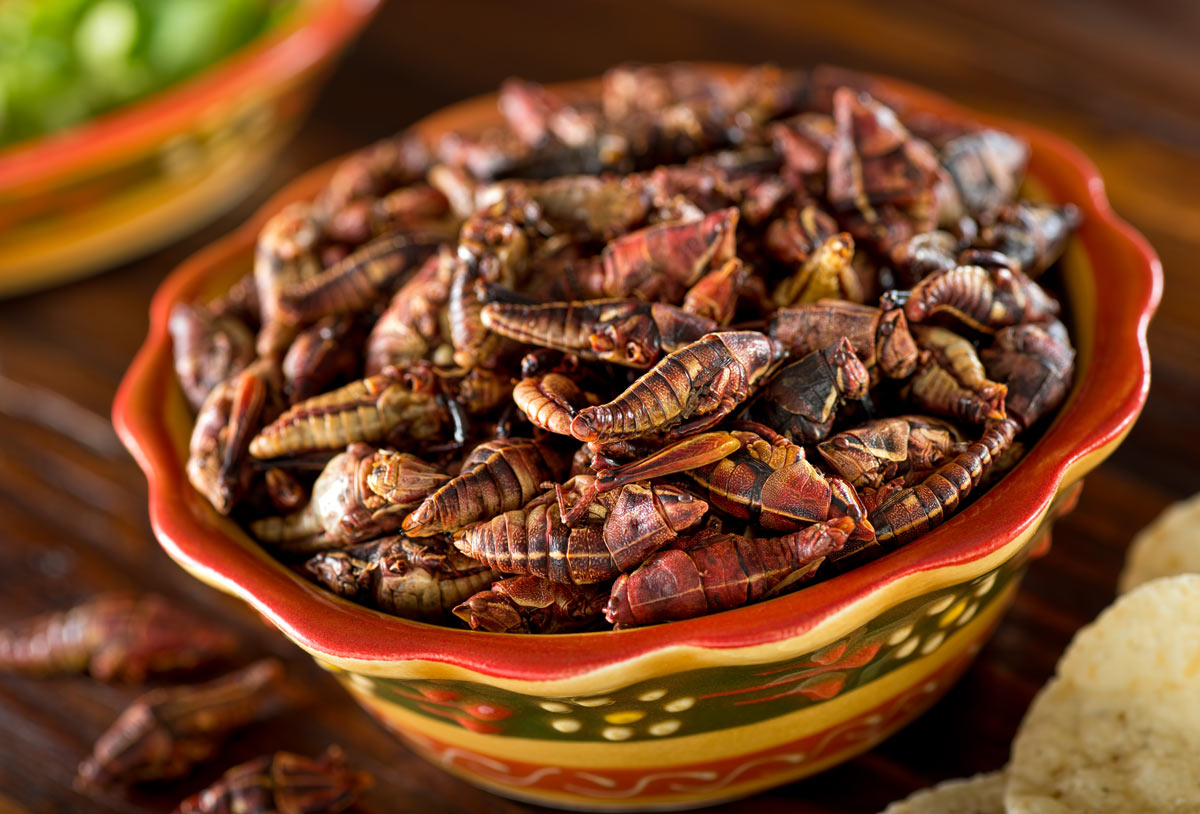 Mexico is one of the most stunning countries in the world. There is no doubt about that. If you’re an adventure seeker there are few places which can offer the breadth of sight, sound, taste, and experience that Mexico does. For foodies, in particular, Mexico represents a unique chance; Mexico has long had an element of insect consumption in its cuisine that is unrivalled elsewhere. The huge number of edible insects in the country made it easy for Mexico’s warriors of old to have a high-protein, low fat diet, and the tradition has not died out!

Long before there were beef fajitas, pork tacos, and fish ceviches, there were dishes and snacks made using the edible insects all around the country. Before you turn your nose up and claim that you have suddenly become vegan, take a look at some of the edible insects you might get to try in Mexico.

Gusanos are iconic; they are the worms most commonly found in the bottom of mezcal bottles, and they are rumored to have aphrodisiacal qualities after a few shots… but they are also prized for their high protein content and earthy flavour. Best served with a side of guacamole.

Libélulas are very popular in the state of Sonora where they are most often seasoned with ever-present lime and salt so that they can be enjoyed fried, or dried, but generally with a tequila shot (tourists might find they need to drink the whole bottle before trying them)!

Much of the cuisine in Mexico is very localized or regional, but chapulines transcend this; these crunchy grasshoppers are without a doubt the most loved edible insects in the country! Typically you will find them fried with chilli and lime to make a crispy, flavorsome snack that can be found in restaurants and at street stands in the state of Oaxaca, although they are becoming more popular in other areas in Mexico.

Chicatanas, or Giant Winged Ants, are another Oaxacan speciality which are prepared in a number of ways, but only at certain times of the year. These seasonal edible insects are almost overwhelmingly plentiful after the first seasonal rains which flush them out of their nests. They can be found in salsas, in a thick, garlic and chilli paste, or pan-roasted with lime.

Dried cuchamás are sold at markets across the Zapotitlán area, and are consumed as low fat, high protein snacks, as taco fillings, or fried with lime, chilli, and onion. They’re so popular, in fact, that these small, green caterpillars are a staple of the diet in this area of Mexico.

Much like that expensive European favorite, caviar, escamoles are prized for their delicate flavor, their texture, and their rarity. Eaten from March to May in the state of Puebla they are often found in tacos, or sautéed with garlic, butter, and onion. You might find them on the menu in Mexican gourmet restaurants in other parts of the country too.

Mexico is home to 88 edible beetle species, but chahui beetles are undoubtedly king. These crunchy beetles are consumed across the country, generally roasted to mitigate their bitter taste. Chahui are picked from the desert-dwelling mesquite plant, from which they eat bean pods.

Jumiles, otherwise known as stink bugs, are perhaps the most extreme item on this menu, but they are still well-loved. Collected from their mountainous homes, jumiles are marinated in lime juice and placed into taco while still live. They are an acquired taste, but there are those who say they have an analgesic effect.